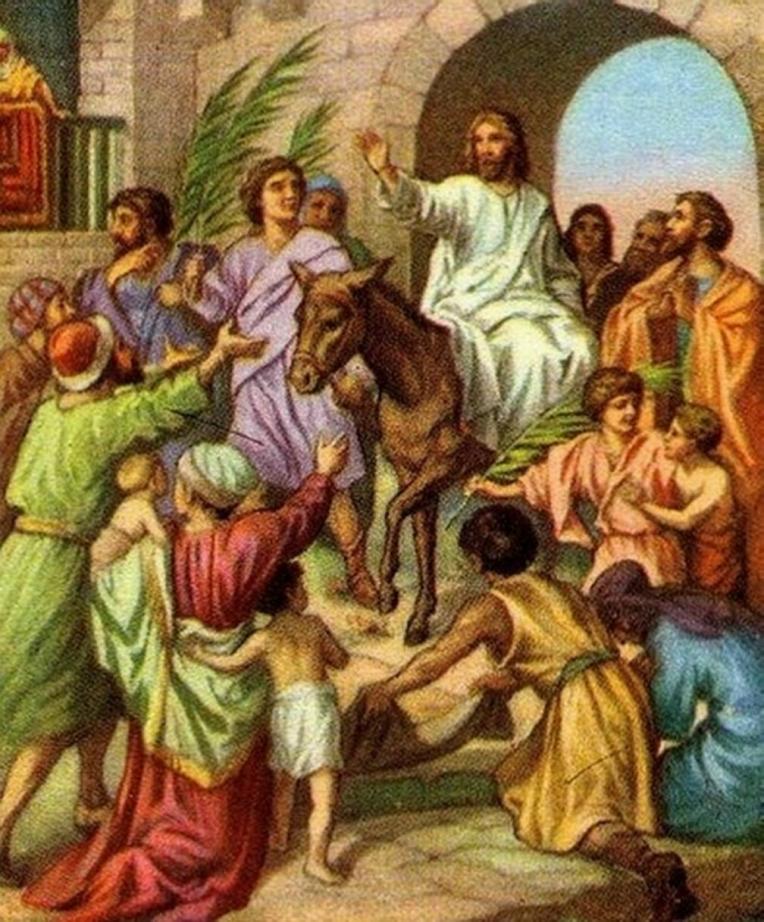 “Jesus of Nazareth is coming!”

Excitement was rampant, and cries of “Hosanna” filled the air. Shouts of joy and triumph could be heard for miles along the road, and people rushed to lay palm branches and their personal garments as a carpet of welcome. Jesus of Nazareth was coming to Jerusalem.

This carpenter-teacher who had journeyed among them for nearly three years, teaching them, healing them, feeding them, forgiving them, raising their dead. This miracle worker, this wise man, this man who was gentle enough to draw crowds of children to his side yet bold enough He would soon drive money-changers from the temple with a whip — this man whom many claimed was the prophesied Messiah of Jehovah — this man was coming again to Jerusalem! I’m sure, had we been there, we would have heard the message repeated over and over again for miles: “Here comes Jesus! Here comes Jesus!”

We in the Christian world celebrate that event on one special day out of the year, and we call it Palm Sunday. We have special services and some of us wave palm branches in the air to commemorate the day that is often referred to by church historians as Jesus’ triumphal entry into Jerusalem. But that event happened over 2000 years ago. One could say it’s all history now; it’s been said and done;  it’s over.

But not so, my friends! I am thrilled beyond words to be able to tell you that Jesus is still coming to anyone and everyone who would like to receive Him. He’s a living, vital, right-now Jesus. He is the I AM. That term is what we English-speaking people have accepted as the translation of the name God gave Himself when He spoke with Abraham, as recorded in Genesis —-. The Hebrew speaking people recognize that the name means much more. It quite literally translates as “The self-existent one who causes all other things to be; the one who is and becomes whatever He desires to become.” And the great I AM desires to become everything that His creation needs.

He’s the same Jesus who rose from the grave and took His throne as Lord of the universe. He’s the same Jesus who promised that if we would call on Him and receive Him as Lord, He would freely fill us with His own eternal life and with power to serve Him. He’s the same Jesus who promised that after our life of service to Him on this earth, we would move on to Heaven and live with Him forever. No questions —  no if’s, and’s or but’s. No struggling to get there, no sacrifice, no hard work, no price to pay. Jesus did the work. He gave Himself as the sacrifice. He paid the whole price. We receive the benefit as a free gift.  And the Word of God, in Hebrews 13:8, says “Jesus Christ, the same yesterday, today and forever.”

Did you know that you don’t have to be a Christian for Jesus Christ to love you? Sometimes we who call ourselves Christians tend to flock together so tightly that we become almost like a clique, and the rest of the world feels as though they can’t break through the wall to become a part. But my message to the “rest of the world” today is that you don’t have to become a part of the “clique of Christianity.”  All you have to do is get to know Jesus, the real person.

And did you know that you don’t have to be a Christian to call on Jesus? That’s right. Jesus isn’t listening just for the call of the Christians. Certainly, He’s attuned to their cries and He rushes to their help when they need Him, but Jesus the Christ is listening — intently — for the cries of all the millions of  His creation in this world who don’t know Him at all. His heart is waiting expectantly for their voice to call out His name. And He’s ready to answer that call swiftly. He’s ready to come home with you at any time.

When Jesus walked the earth, He was often found in the homes of those who were not active believers. People whom the scriptures refer to as “publicans” and “sinners” found that Jesus was more than willing to spend time with them and teach them the truth about God — and show them God’s love by healing their sick and delivering those in demonic bondage. In fact, He often received hateful criticism from the religious leaders of His day because He gave Himself so freely to those who did not have a relationship with the true God. But Jesus’ response was simply that His main reason for coming into the earth was to find those who did not know Him and offer Himself to them.

Zacchaeus was one such man. (His story is told in the Word of God, the book of Luke, chapter 19.) Although technically a descendant of Abraham, Zacchaeus was chief among publicans — which means he made his living working for the Roman government, collecting taxes from his fellow Israelites — and, by his own admission, cheating them. He had heard about Jesus, but he was no believer. However, he was curious, and as Jesus passed through Jericho, right before his entry into Jerusalem on the donkey, Zacchaeus, a short man,  climbed into a tree so that he could see and hear Jesus easily. Jesus called him down from the tree and invited Himself to Zacchaeus’ house.

Zacchaeus recognized Jesus as the Messiah and opened to Him his home and his heart. We know that he invited Jesus in with his whole heart, because, after spending only a short time with Him, Zacchaeus voluntarily confessed his sin of cheating and promised to make restoration of everything with interest. Jesus did not ask Zacchaeus to do so. The man simply opened his heart to Jesus, and a changed nature was the result.

So, I will say once more: You do not need to be a Christian to call on Jesus. No matter what religious tag you wear — including that of “Atheist” —  that tag will not keep Jesus from coming to you if your heart is reaching out for Him and inviting Him in. What will happen to that religious tag after you meet Jesus? Who cares?  I can guarantee you — without qualification — that if you ever meet the real Jesus, you won’t care.

Here comes Jesus!  He’s coming to us today — Christian and non-Christian — He’s coming. With words of comfort and reassurance to destroy fear — with delivering power to destroy the yokes of the devil — with healing and wholeness for body, mind, and spirit — with wisdom and direction that leads to successful solutions — with the power of His Holy Spirit and all of the anointing for service — with eternal life to overcome death once and for all and forever.

Jesus is coming!  He’s coming to you!  Right now! If you don’t already know Him, just open your heart to Him now. Like Zacchaeus, invite Him in – yield yourself to His love, and let Him meet all of your needs today.

This message is also available as a video lesson on your YouTube channel.